YII LIFE
Starry Meow Horoscope Fortune for August 2022
Jupiter going retrograde in Aries at the beginning of the period, to attract other people’s attention, some people demonstrate their talents, while others focus on being troublemakers. Many people fight for opportunities to express their opinions, and the trend of spin control is increasing.
SCROLL
DOWN

Jupiter going retrograde in Aries at the beginning of the period, to attract other people’s attention, some people demonstrate their talents, while others focus on being troublemakers. Many people fight for opportunities to express their opinions, and the trend of spin control is increasing.

In the first half months of August, the society is in chaos, and the new economic measures to be imposed may be promulgated, which will affect the financial and stock exchange markets, and protests among the crowd still happen frequently. On August 4th, the trait of being good at analyzing and questioning will make the information circulate more rapidly and smoothly, and new health issues will also be attached importance. Since the middle of the month, both good things and bad things exist simultaneously, which reminds us to have second thoughts. On August 12th, the determination to attract attention will be strengthened. Many people turn the spotlight on themselves, and important things will occur in financial institutions like banks, and it is a period when people can show their personal charisma.

On August 20th, people's ability to improvise will be cultivated, and people will have the impulse to travel, meanwhile, interaction and learning will have a positive display. On August 23rd, our attention will be turned to our daily life and health, and we will also gain the motivation to serve others. On August 24th, the transformation in the economy and values will be intensified, and the issues of struggling for livelihood and surviving are worth observing.

Since Uranus goes retrograde, there will be five planets retrograde in the sky, implying the arrival of the challenge. On August 26th, understanding and being friendly are the best policy. At the end of August, astrological aspects are still turbulent. Make up your mind and don’t be disturbed by trivialities, then you can get through it easily. In the dry and hot weather in August, fire, circuit network, earthquakes, and economic disasters should be paid attention to, and floods and wars in late August should also be focused on. This month, we should make progress cautiously with an adventurous spirit.

Control your emotions, move forward prudently
Aries
Lucky Strength: Charisma, Execution Ability
This month, Aries will be busy with work and social interaction. Different from the exhaustion a while ago, this month, Aries can deal with things well, their talents will be given to full play and they will have good stages for showing. Although the workload is heavy, with the support of Mars’s energy, the execution ability is quite strong.

Taurus
Lucky Strength: Investment, Action Ability
Different from the sloppy attitude in the past, this month, Taurus begin to actively think about what they wanted to do, and both their financial investment and romance pursuing obtain effective energy, and their action ability will significantly increase. However, sometimes their patience will be insufficient, and controlling their emotions will be the key to success at this stage.

Gemini
Lucky Strength: Goals, Sustainability
Gemini shows momentum in their career, and this month, they will come up with lots of new ideas at work. Although endless inspiration emerges, their patience is not enough to sort out the process, so frustrating things may happen. Travel or meditation is a good way to create a space to think. Following intuition and marching towards goals are the right things.

Cancer
Lucky Strength: Romance, Social Interaction
This month, Cancer has many social activities, and there will be a lot of invitations, which provides good opportunities to meet new friends; old friends will also come for visiting, which is so delightful. Presenting yourself appropriately on social occasions may attract good romance. Being confident in yourself will bring you a good start.

Leo
Lucky Strength: Work, Romance
This month, Leo has a quite good fortune, especially work efficiency can be enhanced, and tasks can be completed one by one, which brings a sense of achievement. In their natural state, Leo will be able to give off their unique atmosphere, attracting romance. However, being overly deliberate may be embarrassing. Present the normal about yourself and romance will knock on your door.

Virgo
Lucky Strength: Travel, Spirit
Virgo suddenly comes up with the idea of taking a rest this month. They want to travel far away, start to plan their journey, and even buy train tickets or plane tickets and hit the road immediately. Their mind can be clarified in different environments, which can enhance their ability to judge current affairs.

Libra
Lucky Strength: Career, Wealth
This month, Libra tries to bestir themselves, and have brand-new inspiration in their career. They will come up with good projects, and will also get benefactors’ help. Due to the improvement of work performance, it is easy to get the appreciation of the supervisor, and there are opportunities for promotion and raise. Cherishing everything and giving more compliments will bring you good luck.

Scorpio
Lucky Strength: Health, Interpersonal Relationship
This month, Scorpio will participate in some gatherings but they always feel like a fish out of water. Although some romances approach, people close to you are not always good, which affects emotions easily. Scorpio will have new ideas about health care. Keeping an appropriate distance in interpersonal relations may protect you from getting hurt.

Sagittarius
Lucky Strength: Family, Mind
This month, Sagittarius will be disturbed by trivialities easily. Although having many trivial things means being trusted, they are also responsibilities and burdens. Spend much more money this month, not necessarily for yourself, but also for your family. In this month, mood rapidly swings, steel yourself and be stronger.

Capricornus
Lucky Strength: Partnership, Enjoyment
Capricorn will face many decisions this month, such as whether to enter into a stable relationship, whether to take over a new position, and deal with matters in regard to cooperating with others. On the other hand, letting your guard down may enable you to show different yourself. Throw away seriousness and have fun.

Aquarius
Lucky Strength: Learning, endurance
This month, Aquarius are in the stage that keep their feet on the ground, and they have to come back to reality to think about problems, and they also have different ideas on financial planning. In a month full of learning ability, give yourself new challenges. As long as make up your mind and be tolerant, you can see the feedback in a short time.

Pisces
Lucky Strength: Fortune, Wealth
Few people can feel everything is going well in August, but Pisces are the exception. They will feel all suffering has its reward, and they will no longer stick to details, so everything is going well. They will also be blessed by the God of fortune, whether it is salary or lottery, there are always chances to make profits. Being humble is the best stepping stone for the next stage. 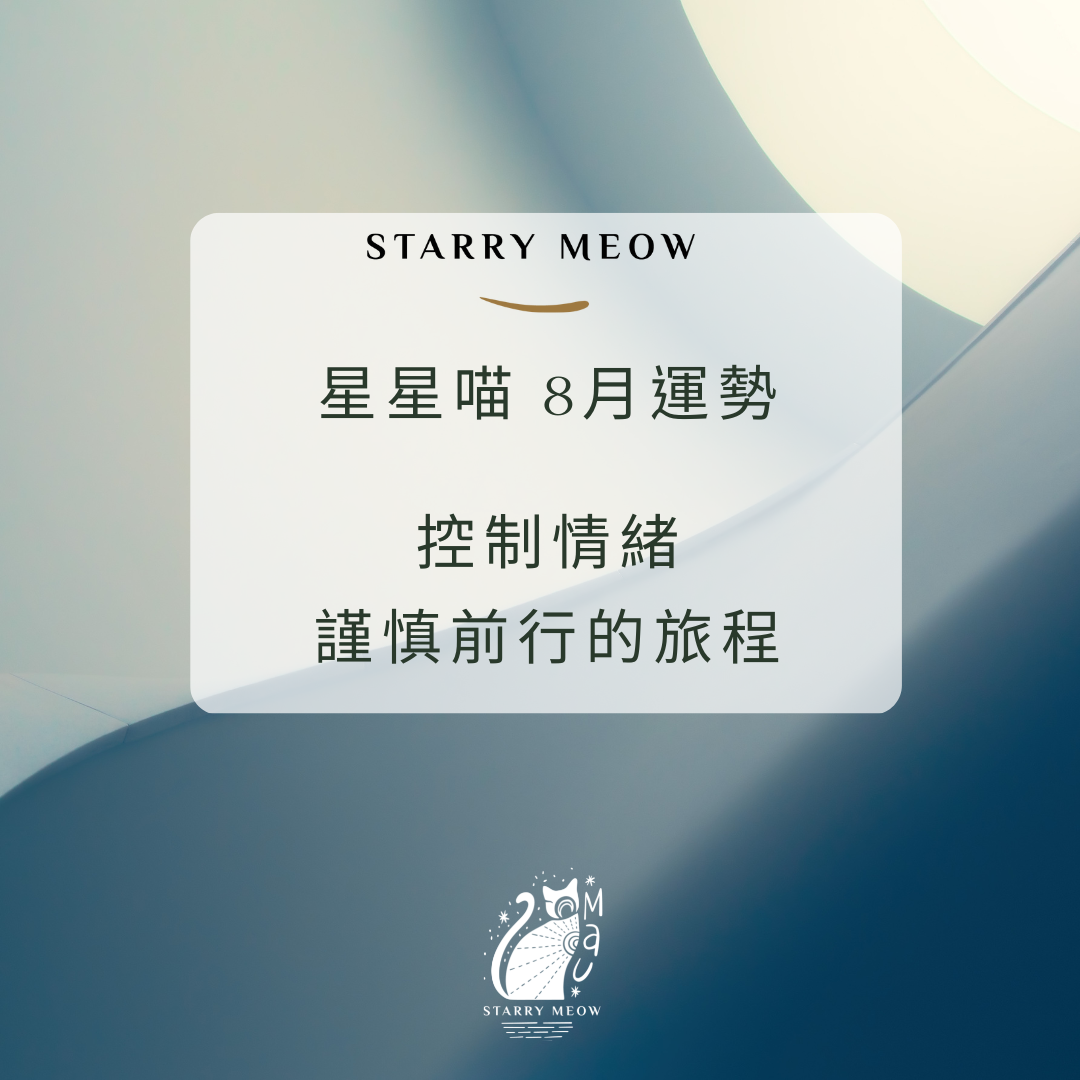 STARRY MEOW'S ASTROLOGY SOFA
Starry Meow was a travel and lifestyle journalist with more than two decades of travel experiences around the world. As luck would have it, she felt the mysterious connection among the universe, constellation, and human beings, opening the gate entering into the Western Astrology world.

She realized that the key point of astrology is not the future you foresee but find deep insights about yourself, and that's what she uses astrology to clarify people's life options. She has completed the high-level astrology courses in Taiwan's Academy of Astrology and currently is the owner of the Starry Meow Studio.
#HASHTAG
Starrymeow AstrologySofa YiiAstrology Horoscope WeeklyHoroscope YiiLife
SHARE